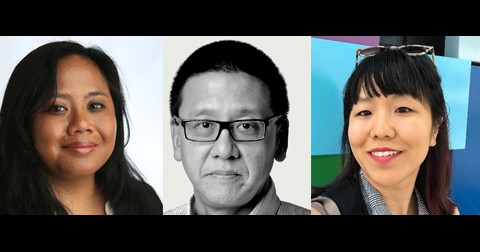 November 13, 2020 - 3:00pm
Pre-registration is required for this event. The Zoom link will be sent out on the day of the event.
Co-sponsored by the Yale Asian American Cultural Center (AACC).

David W. Chen is an investigative reporter on the Sports desk of The New York Times. Before that, he worked on the Metro desk as an investigative reporter, and as bureau chief in City Hall and Trenton, among other beats. A New Jersey native and fluent Mandarin speaker, he has degrees from Yale and Columbia, and worked in Taiwan, Hong Kong, China and the San Francisco Bay Area before joining The Times in 1995.

Willoughby Mariano is an investigative reporter for The Atlanta Journal-Constitution, where she focuses on housing and criminal justice issues. She previously worked for the AJC’s PolitiFact Georgia, where she fact checked the claims of elected officials, and at the Orlando Sentinel, where she covered crime and breaking news. Past honors include a National Headliner Award in investigative journalism and the Atlanta Press Club’s award for civil and human rights reporting. Mariano is president of the Asian American Journalists Association’s Atlanta chapter and chaired the national organization’s 2019 convention.

Suzy Khimm is a national investigative reporter for NBC News based in Washington, D.C. She covers federal agencies, including HUD, USDA, and FEMA, to investigate the impact of public policy on ordinary Americans.

Please note, 50 randomly selected attendees who register using the above link will receive a free poetry anthology and sheet of news/media stickers courtesy of the AACC.