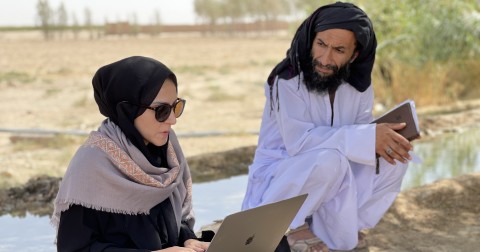 Azmat Khan is a Pulitzer-prize winning investigative reporter whose work grapples with the human costs of war.

She is a writer for the New York Times Magazine, a Carnegie Fellow, and the Birch Assistant Professor at Columbia Journalism School, where she also leads the Li Center for Global Journalism. Khan is writing a book for Random House investigating America’s air wars.

Her multi-part series in the New York Times, “The Civilian Casualty Files,” was awarded the 2022 Pulitzer Prize in International Reporting. The project was the culmination of more than five years of Khan’s reporting, including ground investigation as the sites of more than 100 civilian casualty incidents in Iraq, Syria and Afghanistan, more than 1,300 formerly secret military records she obtained in a legal battle with the Pentagon, and scores of interviews with military and local sources.

Khan serves on the Board of Directors of the Pulitzer Center for Crisis Reporting, as First Vice-President of the Overseas Press Club’s Board of Governors, and is a co-founder of The Gumshoe Group. She is an International Security Program Fellow at New America, where she was previously a Future of War Fellow. She was also previously a fellow at the Macdowell Colony and a Logan Nonfiction Fellow at the Carey Institute for Global Good.

She received an MSt. from Oxford University, which she attended as a Clarendon Scholar, and a B.A. from the University of Michigan. She has also studied at the American University in Cairo, Egypt.