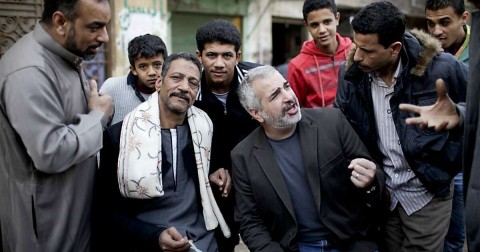 Philip Bennett is the special projects editor at the PBS documentary series FRONTLINE. He was the Washington Post Foreign and Managing editor during the Iraq war, when he worked closely with Anthony.

Thanassis Cambanis is an author, journalist, and director of Century International. He reported for the Boston Globe from Baghdad and was a colleague and close friend of Anthony’s.

Rhonda Roumani is a Syrian-American journalist and a CMES affiliate at Yale University who has written about Islam, the Arab world and Muslim-American issues for more than two decades. She worked with and for Anthony in Beirut.

Ken Harper, an award-winning designer, professor, photojournalist, and media educator, is associate professor and the first director of the Newhouse Center for Global Engagement at the S.I. Newhouse School of Public Communications at Syracuse University.

Rami George Khouri is a syndicated columnist and book author, and Journalist-in- Residence and director of global engagement at the American University of Beirut. He interacted with Anthony during the latter’s entire Mideast reporting years.

Rajiv Chandrasekaran was a senior correspondent and assistant managing editor of The Washington Post, and worked closely with Anthony from Baghdad, Cairo, and Washington. He is now with Emes Project, a Seattle-based entrepreneurial organization on political and policy reform.

Anne Barnard covers climate and environment for the Metro desk of the New York Times. She was Beirut bureau chief from 2012 to 2018. She and her family were close friends and colleagues with Anthony in Baghdad and Beirut.

Leila Fadel is a host of NPR’s Morning Edition, as well as NPR’s morning news podcast Up First. During her college years, Anthony’s reporting from Palestine inspired her to become a journalist, and she later reported from Baghdad when he was there.