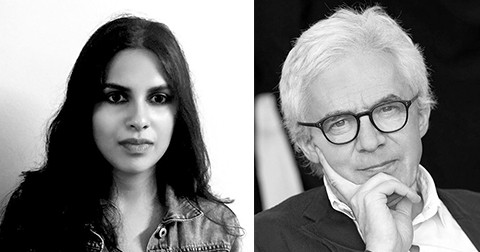 February 19, 2021 - 11:30am
Africa’s Whistleblower Paradox: Lessons from the Frontlines

Poynter Fellow Khadija Sharife (LLM) is a writer, investigative journalist and senior Africa editor at the Organised Crime and Corruption Reporting Project. Her focus is illicit financial flows, natural resources, and political economy. She is the former director of Plateforme de Protection des Lanceurs d’Alerte en Afrique and the author of “Tax Us If You Can: Africa.”

Advocate William Bourdon is a lawyer at the forefront of the struggle for human rights and the founder of the NGO Sherpa, defending victims of economic crimes. He has represented Ed Snowden and key whistleblowers behind Luandaleaks, State Capture, Swissleaks, Luxleaks and other known cases. In 2017, Bourdon created the Platform for the Protection of African Whistleblowers to provide a pro bono legal defense, media support, tech security and even asylum to African whistleblowers.

Whistleblowers around the world have pierced national and international secrecy veils to bring truth to the public. But at what cost and how do they navigate the reality of being a vehicle of evidence that powerful actors wish to quash, discredit or eliminate?

A whistleblower is a person who discloses information regarding actions that are unlawful, illicit or against public interest, that he/she has witnessed, especially in the context of his/her work. By disclosing this information, whistleblowers take the risk of facing physical, financial, legal and other reprisal from wrongdoers.

Most African countries lack protection for whistleblower-related disclosures while other countries that do possess a form of protection tend to have laws that are limited in scope, vulnerable or exist in tandem with intertwined and contradictory legislation.

Underlying judicial systems are political ones: whistleblowers who disclose in countries where authoritarian, dictatorial or dominant parties rule, are subject to extra-legal reprisal that influences accountability from within and without.

Yet most of the known whistleblower cases have been fought in the court of public opinion through investigative and mainstream media as much as in the legal realm. But where done incorrectly, this avenue exposes whistleblowers as much as it discloses the truth to the public, especially in countries where various secrecy and national security laws – or even common law – do not provide protection to media or where litigation can force exposure. And unlike foreign whistleblowers, most African whistleblowers are almost wholly vulnerable to legal, media and political systems while simultaneously being wholly dependent on these actors.

Representing Snowden and key whistleblowers behind Luandaleaks, State Capture, Swissleaks, Luxleaks and other known case is Advocate William Bourdon, a lawyer at the forefront in the struggle for human rights and the founder of the NGO Sherpa, defending victims of economic crimes. In 2017, Bourdon created the Platform for the Protection of African Whistleblowers to provide a pro bono legal defense, media support, tech security and even asylum to African whistleblowers.

The session will also discuss ethical media practices, the need for an international anti-corruption court, a transnational support fund and the right of whistleblowers to obtain asylum.

Besides Convenor/Chair/Moderator Khadija Sharife and Adv. William Bourdon, there will also be comments by Herve Falciani, Johannes Steffansson and Mosilo Mothepu, award-winning whistleblowers at the heart of Swissleaks, Fishrot and State Capture cases that exposed systemic capture of regimes and globally pervasive financial crime and corruption.

There will be ample time for critical discussion.