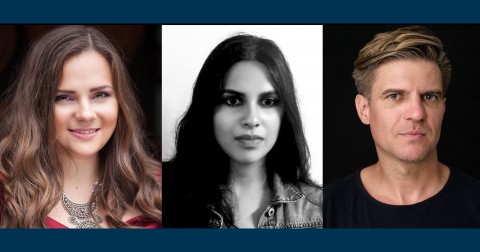 April 30, 2021 - 11:30am
Survival of the Fittest: Sustaining a Global, Independent Nonprofit Media Organization in the 21st Century

Based in Sarajevo, Miranda Patrucic is deputy editor in chief for Central Asia. She most recently worked on the award-winning Plunder and Patronage in the Heart of Central Asia and the Matraimov Kingdom investigations, which resulted in protests that brought down the government in Kyrgyzstan. She has worked on investigations that exposed billions in telecom bribes in Uzbekistan and Azerbaijan; revealed a €1.2 billion arms trade between Europe and the Gulf that fueled conflicts in the Middle East; and exposed ties between organized crime, government, and business in Montenegro.

Paul Radu is co-founder and chief of innovation at OCCRP. He leads OCCRP’s major investigative projects, scopes regional expansion, and develops new strategies and technology to expose organized crime and corruption across borders. Paul initiated and led the award-winning Russian, Azerbaijani, and Troika Laundromat investigations, and coined the term “laundromat” to define large scale, all-purpose financial fraud vehicles that are used to launder billions of dollars.