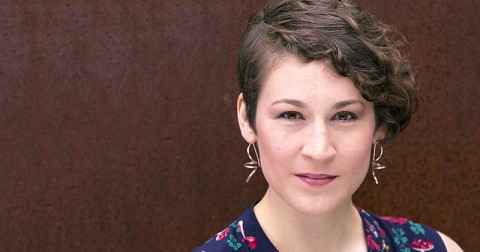 To attend either or both events, please e-mail margaret.spillane@yale.edu by Monday, February 5.

Sara Holdren is a Brooklyn-based director originally from Charlottesville, Virginia and the Artistic Director/co-founder of the theater company Tiltyard. She specializes in Shakespeare, reimagined classics, and spectacular, outsized stories new and old. Recent projects include MIDSUMMER (which she co-adapted from the play by William Shakespeare) with Tiltyard, Deer and the Lovers by Emily Zemba, The Zero Scenario and A New Saint for a New World by Ryan Campbell, and The Master and Margarita, adapted by Edward Kemp from the novel by Mikhail Bulgakov, as well as serving as the Artistic Director of the 2015 Yale Summer Cabaret, where she directed the original production of MIDSUMMER and Sarah Ruhl’s Orlando. She holds a BA in Theater from Yale University and an MFA in Directing from Yale School of Drama. She is also a Drama League Fellow and a graduate of the Acting Shakespeare program at the Royal Academy of Dramatic Art.

Other work includes: Measure for Measure, Tiny Boyfriend by Phillip Howze, The Tempest, and her own adaptations of Shakespeare’s Henry IV plays and Leonid Andreyev’s He Who Gets Slapped.

Sara is also a writer, a graphic designer, and a teacher with an abiding interest in making theater with students of all ages (recent teaching includes Primary Stages and the graduate acting program at the New School). In her work, she combines a lifelong love of Shakespeare and classical texts with an interest in contemporary ensemble training and devised theater, striving for a rigorous and dynamic use of language, fused with passionate, physical storytelling, vibrant visual worlds, and a spirit of joy, collaboration, and play.