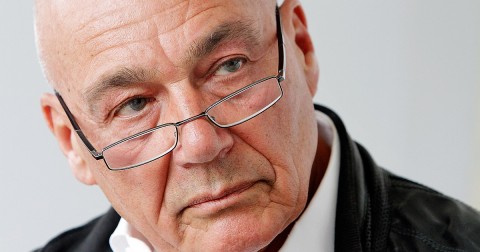 Co-sponsored by the Program on Russian, East European & Eurasian Studies; the MacMillan Center; and the European Studies Council

Vladimir Pozner is host of a Moscow interview show “Pozner” on Russia’s Channel One since 2010. Host of several shows on Russian TV since 1961. Senior editor with the English-language Soviet Life magazine (1961). In 1967 transferred to publication, Sputnik, leaving it in February 1970 to become a host of the Voice of Moscow, a “propaganda radio program”, a tv network funded by the Russian government. Pozner worked as chief commentator for the North American service of the Radio Moscow network. From early 1970s until early 1990s, he was a regular guest on Ray Briem’s talk show on KABC in LA. In the 1980s, he was a frequent guest on Ted Koppel’s Nightline. Pozner was the host of Moscow Meridian, an English-language current affairs program focusing on the Soviet Union; the show was produced by Gosteleradio, the Soviet State Committee for Television and Radio and broadcast on the Satellite Program Network. He also often appeared on The Phil Donahue Show. In the mid-1980s, Pozner co-hosted several bilateral, televised discussions (or “spacebridges”) between audiences in the Soviet Union and the US, carried via satellite. These were initially produced with Helene Keyssar at the University of California, San Diego. They included “Moscow Calling San Diego: Children and Film” (with Mike Cole), “Remembering War” (May 7, 1985, with Fred Starr). Later programs included “Citizens Summit I - Leningrad/Seattle” (December 29, 1985) and “Citizens Summit II: Women to Women - Leningrad/Boston” (May 20, 1986) - both with Phil Donahue. In 1991 Pozner was asked to resign after being quoted voicing his support for Boris Yeltsin over Mikhail Gorbachev. From 1991-1994 he and Phil Donahue co-hosted Pozner/Donahue, a weekly, issues-oriented roundtable program, which aired both on CNBC and in syndication. Pozner returned to Moscow in 1997 as an independent television journalist. Later that year he founded the School for Television Excellence in Moscow to educate and promote young journalists. From its foundation in 1994 until 2008 Pozner was president of the Russian Television Academy, which annually awards the prestigious TEFI trophy. Pozner also worked for the Institute for US and Canadian Studies, a Soviet think tank.